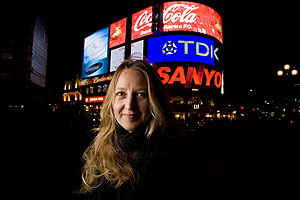 Following on swiftly from the previous after dark example, this portrait has a very similar story behind it. This school teacher is part of a scheme to get people to leave the world of business and go into school management and become head teachers after a few years of teaching. She had worked in the advertising and promotions field and so the picture editor wanted her pictures to show this in some way. One of the assistant picture editors and I dreamed up this idea and at 7.00pm on a winter evening, once all of the lights are on we met up and shot these portraits.

London’s Piccadilly Circus is a bit of a mini Times Square. It is a major road junction right in the heart of the capital and so shooting pictures here presentss it’s own problems. Once again I was blessed with very light winds and so I could use my Chimera 24″ x 36″ soft box on a Lumedyne (I used the custom creation shown here).

The fastest way to judge the exposure on the lit advertising was to shoot a couple of test frames. I quickly worked out that 1/60th at f5.6 was about right on 200 ISO and so I got my flash into position about 1.5 metres from the subject with the centre of the box pretty much level with her eye line.

The flash was off to my left at about thirty degrees from the axis of the lens. Whilst there wasn’t any real breeze, there were dozens of people about and, like most touris magnets around the world, the area is well known for bag snatchers and pick pockets. Because of this I kept the kit with an arms length and shot one handed with my left hand firmly grasping the light stand. This meant that moving the flash wasn’t going to be too easy and the first test frame that I fired on 50 joules was about half a stop over exposed.

A quick stop dwn to f6.7 put the flash exposure right and so the ambient exposure (controlled by a combination of aperture and shutter speed) needed to be adjusted to 1/45th at f6.7. The ambient light on the subject was enough to focus with, but not enough to affect the overall exposure.

After shooting this “obvious” shot we moved next to the edge of the pedestrianised area where i used a “bungee rubber” (strong elsatic with a hook on either end) to lash the flash set up to a railing. I shot some frames on a long lens with the squashed perspective but my first idea (as is often the case) won the day.