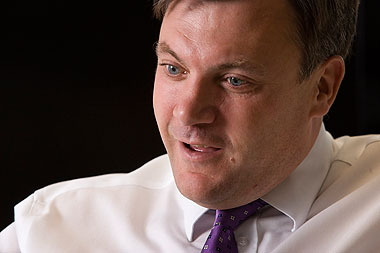 I have to shoot a lot of portraits during interviews and there have been several technique examples on this web site about the techniques and decisions that need to be made when doing that kind of work. This one isn’t about lighting set-ups or pre-planning – this is simply about seeing an angle and making the most out of it. This gentleman is Ed Balls: Member of Parliament and Secretary of State for Children, Schools and Families in Gordon Brown’s Government. The reporter had a short time to ask him questions from our readers and to conduct an interview around his responses. I had to shoot with my back to a glass wall and against the light. I set up a Lumedyne with a simple shoot through umbrella almost directly opposite the Secretary of State and behind the reporter. I had limited space in which to move and shoot.

This wasn’t the first time that I’d shot him. It wasn’t even the first time that week. We had met a few days previously at an event with Henry Winkler (yeah, The Fonz!) where Henry read from his new book to some kids and Ed acted as his straight man. Great fun. Anyway, back to the interview…

I have included the two vertical images below to show the layout of where we were sitting and to show where the black background for the third shot came from. The office is large and pretty bright – too bright sometimes. I was shooting with a 16-35 f2.8L on one Canon EOS1D MkII and a 24-70 f2.8L on the other. The background exposure was about 1/125th at f5.6 on ISO 320 and so I set the Lumedyne on 1/4 power to balance that. After shooting twenty or thirty frames of standard moving hands interview pictures I was looking for something a bit different. 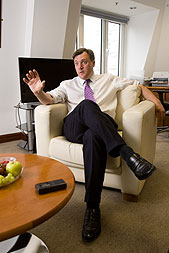 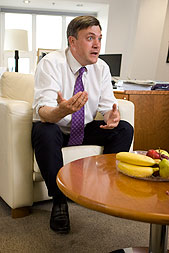 I often use lighting to give me something special but I noticed that Mr Balls was being quite reflective in his answers to readers (ie teachers) questions and so I moved around to his left to see if I could use the large black television monitor as a backdrop. I switched lenses to a 70-200 f2.8 IS L and I realised that I would have to shoot from a higher angle than I would have otherwise done if I was to get my clean, black background. With the lens near the 200mm end of it’s focal range I was able to get what I wanted and the added benefit was to emphasise the reflective nature of his answers.

Three changes of angle: the angle of axis between the subject and the lens relative to his line of sight, the angle above his eye line that the camera was at and the angle of view of the lens itself. Added together they made a different image which itself told the story in a different way.