Hiding the Flash in the Frame 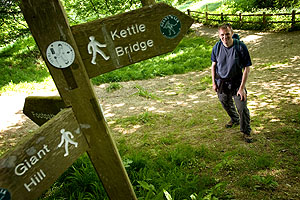 The great thing about creative flash is that you can play around and pretty much make it up as you go along. Learning from each set up as you go isn’t just a useful side effect it is the whole point. Just recently I have been hiding the flash in the picture a lot. This basically means that the light souce isn’t off to the side of the frame – it’s strategically hideen somewhere right there. I use doors and walls, poles and posts and even other people to mask the location of the flash, but it is there. This portrait of a teacher who does a lot of walking in the hills near his Dorset home is a useful case study. We had already shot quite a few really nice images of him using flash to overpower the daylight (see technique example here) and one of him walking without flash that you can see below:

Yes, it’s true – I do sometimes shoot pictures with no flash! With these in the bag, and knowing that the Picture Editor would be more than happy with those we walked further around the hill and into the woods. From working in light that gave readings of around f16 at 1/250th of a second at ISO 200 we were in a green tinted world where the readings were more like 1/60th at f4 on ISO 400. The dappled ligt was pretty but not much use for shooting a portrait. Getting my lights out again I was looking for somewhere to shoot a picture that gave a sense of place and the carved wooden signs giving directions were perfect.

For those of you who take in all of the technical details the exposure went like this: The available light reading was just under 1/60th at f4 on ISO 400 and so I set the camera to 1/60th at f5.6 which under exposed the scene by about one and one third of a stop. The Lumedyne was set at 12 watt/seconds and at a distance of roughly seven feet (about 2.2 metres) to give the right amount of light for the 5.6 aperture reading that I needed.

For those of you who like trivia, the first couple of pictures of my subject sitting on the hillside were taken on the hillside in Dorset known as Giant Hill. It is famous for a giant chalk carving of a naked and aggressive looking man. It was made even more famous recently when a giant Homer was painted next to it as a publicity stunt for the Simpsons Movie. I would guess that the pictures were taken from somewhere on Homer’s right leg!