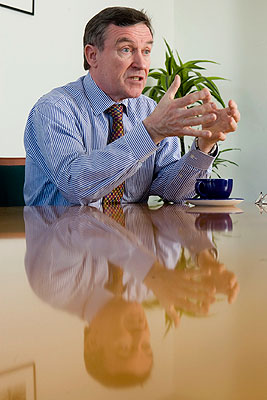 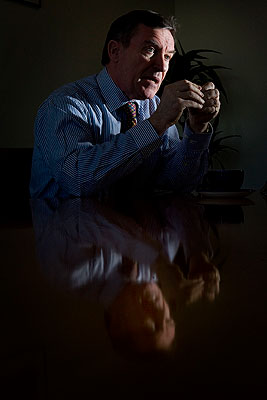 It has been a while since I added any new technique pages to the site so here is one that I have been meaning to do for quite a while. The idea here is to have two seperate lighting set-ups for one interview portrait without having to constantly move around the room adjusting lights. This interview was with a senior businerssman who chairs a body that decides how much teachers’ pay rises will be each year. The reporter wasn’t all that comfortable with me shooting through the interview but it was what the picture editor wanted, so that’s what I did. This job required a bit of quick thinking so that I could get two different set-ups in place.

The picture on the left was lit using a single Lumedyne head at 50 joules bounced off of a wall almost in front of the subject. The image on the right was lit by a single Canon 550ex flash gun with a Honl Photo snoot attached aimed directly at the subjects face and set further away from the camera.

Both flash units were fitted with Pocket Wizard receivers set on different channles from each other. The idea here is that by simply switching between channles on the transmitters I could switch between two very different lighting styles without moving.

The left hand image is far more evenly lit. The large expanse of off-white wall made a very good and large light source. The exposure here was 1/60th of a second at f5.6 on ISO200. There was some available light play – without flash the scene would have been two stops under exposed with that amount of flash. You can see from the diagram below how the room was laid out and the flash head was positioned at about 10 degrees above the subjects eyeline. The right hand image is far more starckly lit. The exposure was 1/250th of a second at f13 on ISO 200. There is almost no available light in this picture and the lighting effect is dramatically different. The very narrow angle of the light offered by the Honl snoot makes it difficult to always get the subject right in the cenre of the small pool of light and so you need to be careful when aiming it to centre it on where the subject is most likely to be.

The point of this technique is that you can arrange more than one style of lighting and then switch between them at will simply by selecting a different channel on the trigger. I find that I use the Honl snoot a lot more than I had imagined that I would. It fits into a bag very easily and it is simple to use. When you are in complete control of the lighting, it’s very easy to achieve dramatic results. This style of light might not be to every picture editor’s taste and so the evenly lit alternative is a very good idea. 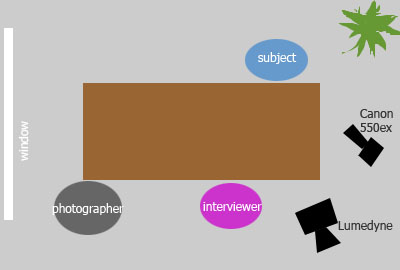