Back On The Beach 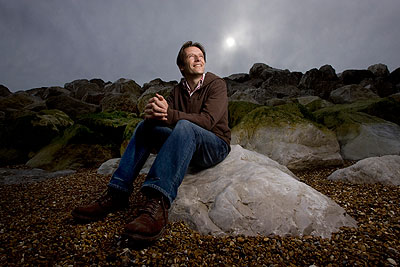 I was born by the sea, I live by the sea and I really enjoy shooting portraits by the sea. This example was of a young teacher who has moved his family to the coast to get a better way of life and he had given an interview to the paper about the way he lives – cycling to work, spending time with his family and generally making the most of the beaches in his area. My brief was simple – shoot a nice portrait on the beach!

Most people assume that photographers like brilliant sunshine. I guess that most people only take pictures on nice sunny days because that’s their holidays and the scenery often looks better with brilliant blue skies and high contrast landscapes. People never look their best in direct sunlight – they squint and have heavy and horrible shadows around their eyes and faces. There are enough technique pieces on this web site about overpowering daylight for you to know how much trouble I go to to get rid of those nasty shadows. My subject for this portrait was disappointed when I arrived on an overcast and rather damp afternoon in June. I spent time assuring him that I was happy with the light and that we would end up with a better image and more interesting because of it.

We started by going to the nearest part of the beach to his home where there is a huge breakwater built out of local rocks. The rest of beach is made of shingle and so I decided that we would use the breakwater as a backdrop and it would also allow us to stay out of the wind. Outdoor portraiture is very heavily affected by wind – unless the subject is bald! My first reaction was to shoot with quite a bit of space around my subject with the sea behind him. This kind of photography is an evolutionary process and having the LCD screen to refer to is a great time saver over the need to produce Polaroid pictures and so I went from close with a wide lens (left hand image above) to much further away with a short telephoto (second from left).

Having the flash so close to the subject means that the coverage falls off very sharply. Flash fall off theory says that if the flash to subject distance is six feet (1.8 metres) then anything at a distance of 1.4x that (8.4 feet or 2.52 metres) is going to be 1 f-stop underexposed and anything at 2x the distance will be two f-stops underexposed. 2.8x the distance = 3 f-stops and so on. This also has implications for the foreground and so I deliberately angled the reflector to make sure that the stones and rock between the subject and the light did not get much light.

The two pictures in the set of four at the top of this page were shot after I was happy with what I’d done. I have been playing a lot with getting my subjects moving and jumping on and off of rocks took up a few minutes of the assignment. I ended up with a really close up portrait with no flash. – just using a shoot through umbrella as a reflector to get a bit of light into the subject’s face.

When the story ran in the glossy magazine that comes free with the paper they chose a version of the second of the four images above. I still prefer the man on the rock with the weak sun image but they wanted to see the sea – who doesn’t?