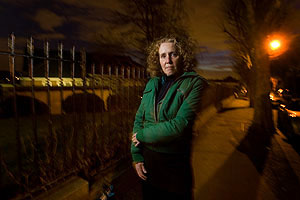 It’s been well over a year since I last posted a new technique page. Life just got in the way! Anyway, they’re back and this photograph was taken as a portrait of a woman who had made a huge career change from a high flying public service to becoming a secondary school teacher. When it was taken she was still studying and hadn’t got a job in a settled school yet and so the situation and the deadline meant that we had to shoot at a certain time of day (an hour after dark) outside the school.

My middle name ought to be “get the safe shot first” and after meeting her and realising that the rapidly falling temperature meant a quick shoot outdoors I did just that. With the flash lit image “in the can” I decided that I wanted to use the unusual sky with clouds and the eerie orange colours of London street lights.

I had a Lumedyne kit with me and there was only a slight breeze which enabled me to use a 24″ x 36″ soft box. The Lumedyne Signature series packs can be turned right down to only 6 joules (6 w/s) and so balancing the flash with the almost non-existent daylight wasn’t going to be a problem. My biggest problem was getting my subject into the “shade” away from any of the street lights so that she could be lit by flash alone.

In the end, the only place on the street where she was out of the sodium lights was in the shadow of the Chimera soft box! This meant that the flash had to be in a certain position – two metres from the subject, about twenty degrees above her eye line and at about 40 degrees from the axis of the lens. As a set of restrictions, these aren’t too bad and so I set about getting light and flash readings so that I could get the shot done and get both of us into the warm again.

A straight reflective reading from the sky (through a 16-35 f2.8L lens on a Canon EOS1D MkII) was one second at f4 on 200 ISO and so I set the flash to 1/4 power (50 joules) and did a test shot. This overcooked the flash by a small amount and so I stopped down by half a stop. The test shot showed the sky a little less dramatically than I’d hoped it would be and so I went to two seconds at f4.5. From the look of the LCD screen this was just right but I played safe and shot the shutter speed with some bracketing from four seconds to one second (one stop over and one stop under).

Hand holding at shutter speeds of two or more seconds is never going to be an exact art and so I shot a lot of frames that were very similar. By getting the subject into the “shade” I had pretty much guaranteed that she would be frozen and so I could be pretty carefree with my stance and keeping the camera still. I had enough time to shoot some pictures with a 70-200 f2.8 L IS lens with image stabilisation turned on as well. These images were remarkably sharp, but at the end of the ten minutes I knew that I preferred the pictures made with the 16-35.

On the topic of white balancing, I am quite cavalier in my approach because I shoot RAW but I have noticed that this particular Chimera soft box has started to get warmer over the last few months. I have worked out that I should shoot with the white balance set to 4850 degrees if I want to save myself the bother of making the changes in Adobe Camera RAW.

Sometimes you know that you’ve done a good job and driving home to get warm and edit the shoot I actually felt quite excited!