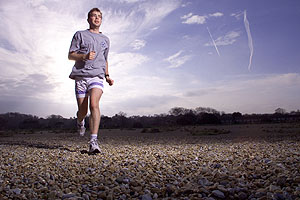 Some images are so obviously set up that there is little point in trying to make them seem otherwise. This job was all about a teacher who was in training for the London Marathon and was timed so that the pictures would be shot ready for the story to appear just two days before the event.

The photograph was commissioned by a picture editor who knew the area well, so I had to sure that the location featured in the final image.

Late afternoon is one of my favourite times of day for shooting photographs so I was pleased that the job was booked for about an hour or so before sunset, but less pleased to find out that I wouldn’t be able to make use of that sunset because the teacher had another engagement to make by then.

I picked him up from the school where he works as a modern languages teacher, and by the time I got there he was already changed into his training kit. We drove the mile or so to the shingle beach and I started out shooting some long lens pictures of him running along the crest of the shingle bank.

Sometimes your first idea comes off and every photograph that you take from then on is an experiment, a bonus if you want to put it that way. I was really happy with the profile version of the running shot, but I decided that I wanted to try something a bit more challenging in the full knowledge that the picture editor had sent me on this assignment because he likes the more moody flash and daylight work that I do a lot of.

I quickly got the idea of getting him to run straight out of the sun, with the sun itself obscured by his body. I took a light reading (through the camera) of the sky around him and at 200 ISO the reading was a huge 1/250th of a second at f16. Even the relatively powerful Lumedyne 400 pack that I had in my car was going to struggle with this one unless I used the flash without either a softbox or an umbrella. I set it up with just the head, reflector and the translucent disc that doubles as a protector and occasional diffuser.

With this kind of work a difference of only six or seven inches (15cm to 17.5cm) can effect the exposure so it was vital to establish what actors call a “mark”, a point at which the action happens. I chose one particularly light coloured pebble and got him to stand on it while I first took a flash meter reading and moved the Lumdyne unit to the correct distance from that mark to get an aperture of f19 – half a stop under the available light reading for the sky. With the flash in place, I got him to measure out how far back he needed to start to get his legs in the right position as he ran and hit his mark. Once we had this down to a fine art the shooting could begin.

At a normal jogging speed he would be in the perfect position for just a split second, so I pre-focused on that point (although at f19 on a 17mm lens, the depth of field was pretty big) and anticipated his stride as he came through the mark. He ran back and forth many times until I was pretty certain that I had a few good exposures with his body in a good position and a decent expression on his face.

By this time the sky was nearly perfect, although a vapour trail from a jet aircraft did spoil it a little so we worked quickly to get the shot you see above in the can. The flash fall off is sudden, as you can see on the foreground where it goes dark very quickly and the shadow was pretty hard. These are the kind of compromises that you have to live with when you have less time than you would like and can only use as much equipment (lighting) as you can carry on your own. I am pleased with the way that this shot has turned out, just as I was pleased with the way that the other variations in the set that I filed later that evening looked. Sometimes having some strong clues about what a picture editor wants from a photograph can be really helpful.