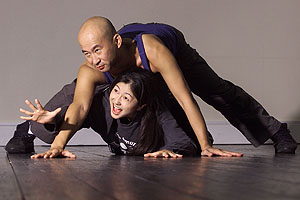 I am often asked to photograph dance and drama. This time it was an early rehearsal for a piece involving Japanese dancers that was taking place in a messy rehearsal room. I decided to watch what they were doing and make notes of the best scenes to re-create with decent lighting. I think that still counts as news photography….

Life is usually easier when you are dealing with professionals and that is often true with actors and dancers. The group of four dancers that I was working with were really happy for me to watch them and were a little relieved when I offered them the chance to pose the photographs as their rehearsals were at such an early stage that they felt it would make them more comfortable to do so.

I watched them working for about fifteen minutes and used my digital camera as a notebook, photographing small scenes that we could then set up and light properly. The dancers quickly forgot that I was there and with the images being purely a form of notation I shot at 1600 ISO from the back of the room.

When they reached a suitable break I got them and the director together and we looked through the various quick images that I had shot on the LCD screen. I explained to them what I liked and disliked about the various positions and we settled on three scenes to photograph.

Whilst the dancers drank water (it was a very hot day in a very sweaty room) I set up my Lumedyne lights. The rehearsal studio had one blank wall (which I decided to use as my background) and a decent polished wood floor. I quickly removed any bags, water bottles and clothing so that the image could be as simple and effective as possible and put a Chimera softbox on the 400 joule (1 joule = 1 watt per second) flash head and set the lighting stand so that the centre of the box was about 1.5 metres (5 feet) from the floor. Another quick word with the two dancers involved in the scene and they got into position. I then positioned the flash at about 45 degrees from the lens axis at a distance of two metres (six and a half feet) from them.

I had chosen the softbox to give a directional light that wasn’t too harsh as I wanted the dancers to almost reach for the lightsource. The director had said that they might be reaching towards a light in the performance so that seemed the best thing to do. I got as far back as I could, which allowed me to use my 70-200 lens at about the 100mm mark (160 35mm/digital equivalent). On 400 joules and at 200 ISO the flash gave a meter reading of f8, which was fine as there was no confusing background that I needed to isolate with a shallow depth of field. I set the shutter speed to 1/250th of a second to make sure that the available light made no difference to the amount of light on the image. The single flash was triggered using my Wein trigger and I started shooting.

In all honesty I knew that the first set up was the best one before I started so I made sure that I had a good variation on the idea with plenty of strong facial expressions from both dancers. Because this picture was so strongly landscape in it’s shape I needed to set another scene up as the potential vertical and I went through it all again with the other two dancers so that: a)my picture editor could use two pictures if necessary, and b) so that nobody felt left out of the process. I find that it is usually the first or the last idea that works best, and here the first was the winner.

Using the digital camera as a notebook and showing the images on screen isn’t so different from handing around Polaroids. The discussion with the professional dancers was helped by showing them something visual and we got good pictures without too much stress.

FOOTNOTE: It was whilst shooting this job that I first heard of the attacks on the World Trade Centre in New York. My thoughts immediately went to close friends living in the city. Every person in that room knew people who would be in danger that day and it is an illustration of how small the world has become that we all had specific people in our thoughts.