Adding To The Ambient 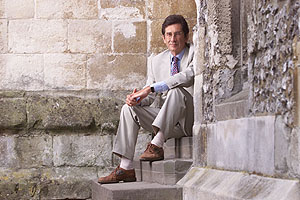 It’s quite often the case that the available light looks great, but that there just isn’t enough of it. The trick here is to use flash to supplement the ambient light without replacing it. When you have the headmaster of one of the world’s oldest and grandest schools it isn’t difficult to choose a location in which to make his portrait.

After a very quick stroll around the fourteenth century buildings we settled on this well worn flight of steps to shoot the pictures. There was no sunlight on the scene, what light there was had been reflected from a nearby pale stone building so it was nicely diffused whilst still directional. Unfortunately this gave a 200 ISO light reading of 1/45th of a second at f2.8. This is simply not enough to guarantee sharp images so I decided to supplement that small level of ambient light with flash.

The available light was coming from my left so I decided that a softbox would best replicate the quality of light that was there. I have a two foot (60cm) x three foot (90cm) Chimera softbox so I fitted it to a Lumedyne head and placed it on a lighting stand about six feet to the subject’s right at about 20 degrees above his eye level.

The flash reading at 50 joules was f4 so I put the power up to 100 joules and settled for f5.6. The spread of the softened flash was such that the whole width of the scene was fairly evenly lit, but I decided to allow some of the available light to contribute to the overall exposure. With the camera set to 1/45th of a second and the lens to f5.6 the ambient exposure was two stops under, so I set the shutter speed to 1/30th which is one and a half stops under exposed – enough to add something to the scene without risking camera shake.

The LCD screen confirmed all of my light meter readings so I shot with a 70-200 f2.8 lens with variations on the composition and some vertical and horizontal frames. Then, with the subject filling the same portion of the frame I switched to a 17-35 f2.8 lens giving a quite different perspective. On balance I preferred the longer lens composition, but I went on to shoot a few more locations and lighting situations. The keyword for this kind of lighting is subtlety. It is a way of taking something that is so very nearly perfect and bringing it that little bit nearer still to that goal.