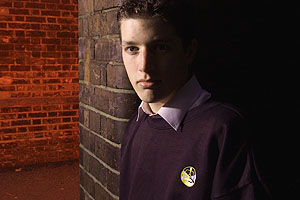 This colourfully lit picture goes with a story about inner city crime and mugging. The boy in question worked on a report about youth as the victims in the area he lives in. I wanted the picture to have athmosphere, and there is nothing like a bit of coloured light for adding some. In lighting the background it is important to place the background light so that the viewer doesn’t notice where the colour is coming from.

A lot of school buildings in London date back into the nineteenth century, and many of them have areas of austere brickwork which make wonderful locations for portraits.

The image is very simply lit with a single Lumedyne head on the subject at an angle of 90° from the axis of the lens diffused with it’s reflector cover. The flash was about twelve inches above his eyeline. The second Lumedyne head had a red effects filter over the refelector and it was placed behind the wall that the boy was leaning against. The flash units were synched by Wein high sensitivity slave cells, fired by a Wein infra red trigger so there were no cables involved in the set up.

On 200 ISO the flash reading was f16 at 100 joules at a distance of four feet. The available light wasn’t wanted at all so the shutter speed was set to 1/250th of a second on a Kodak DCS520 camera with a 17-35 f2.8 lens. To get the correct amount of light on the far wall with the red gel, I tried it on 100 joules at six feet from the wall. The LCD display suggested that the background was a little bit overflashed to get the dark red that I was looking for so I moved it to eight feet and turned the power down to 50 joules – which turned out to be just about perfect. Having the boy’s face half in shadow adds to the athmosphere of the image and combined with the strong red colour it all adds up to exactly what I had set out to do. Any strong colour will add to the athmosphere of a photograph and it is always worth having some pieces of gel to hand in a variety of colours.