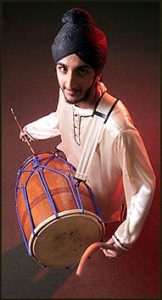 When you have just spent three hours driving to a job going over what the picture editor and the designer said to you about the pictures that were required it is inevitable that you start to make some plans. This job was certainly such an occasion.

Blue skies accompanied me all the way and I was planning to light the shot against a wonderful sky.I arrived in plenty of time and as the young musicians gathered and put their costumes on I sat drinking coffee. I then watched as the sky turned from blue to grey to black in the space of seconds and the rain started to fall. Those plans hatched in the car had to be changed. Quickly.

The room set aside for the photographs to be shot in was large enough but full of tables and with very cluttered walls. In this kind of situation there are only two options: a) cry and go home, or b) make the most of the surroundings.

The floor was a messy carpet and the ceiling was pretty even and plain white. If in doubt, get up high and shoot down or get down low and shoot upwards. I decided to try both.

The first drummer (left) stepped up and I stood on a table to make sure that I could get get him into the frame with a 17-35 f2.8 lens. Once I was sure that was going to be possible I had to light both him and the rather muddy grey floor. The main light used was a Lumedyne 200 joule (watts/second) pack and head with a 70cm Chimera softbox. 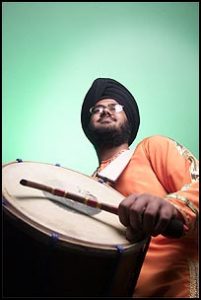 I chose to use the box rather than the umbrella to better concentrate and control the light. The background light was another Lumedyne pack and head with a narrow cut red effects gel over the diffuser cap. The main light was at an angle of about 80 degrees left of the lens axis with the centre of the light about five centimetres (2 inches) above his eyeline. The background light (set to 50 joules) was 135 degrees right of the lens axis at about the same height as his head. The exposure at 200 ISO was at f16, with the shutter set to 1/250th just to make sure that no available light crept in. The units were triggered by a Wein SSR trigger. I shot about ten frames with each of three different drummers, changing the coloured gel to suit each boys coloured tunic.

To ring the changes I also shot a set of pictures lying on the floor with the main light moved to 45 degrees right of lens axis. The ceiling suddenly became the background, so I lit it with coloured gels. The exposures were again f16 at 1/250th with the background light set to 50 joules with a two stop Neutral density filter top further cut the power down and achieve the correct density of colour.

No matter how many conversations you have planning a shot and no matter how much thinking you do in advance you have to be prepared to change those plans and make new ones in seconds. Of course having to keep a conversation going with two teachers and six skeptical teenagers, maintaining their confidence and trust is a skill that they don’t teach you in college….