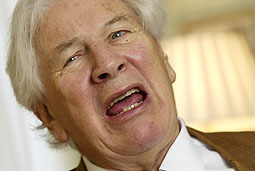 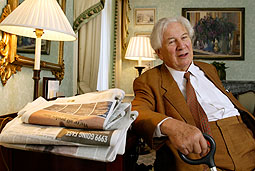 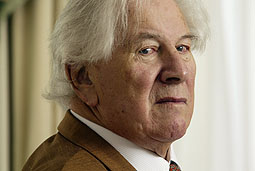 It has to be one of the most quoted cliches that “rules are made to be broken” and closely following behind it is the notion that something might be the “exception that proves the rule”. I have never been one to avoid a cliche…

The rule in question? I have always maintained that pictures are better without clutter. I have even written somewhere on the web that anything that doesn’t add to the composition of a photograph detracts from it.

In the case of this set of portraits of the octogenarian actor, Sir Peter Ustinov, the clutter of his hotel suite somehow makes the portrait. For those of who don’t know of the great man – he is an actor, writer, performer, broadcaster and raconteur who has been in the public eye for over sixty years. More importantly, he is someone that I’ve always wanted to photograph.

Just for a change (irony) I was given about twenty minutes in a hotel suite to make this portrait for one of the regular slots in one of our magazines. The good news that shooting for a regular slot is that you know the shape in advance and where any copy or gutters will fall. This slot always uses a horizontal image, but it can be either a half length or a tight image so it’s always best to shoot both.

Sir Peter isn’t as mobile as he used to be so he couldn’t be asked to keep moving around the room so my first task after a hearty handshake and a quick hello was to decide where he would be sitting. The sofa was way too low, so the chair at the desk was the only other option. I angled it so that I could move around him without his being required to move too much.

My standard lighting kit of a single Lumedyne pack and head combined with a white 90cm (36″) umbrella and a Wein infra red trigger and slave cell comes into it’s own when you have to work quickly, in a tight space without spare mains sockets. I set the pack to 100 joules (watts per second) and set the centre of the lightsource about 8cm (3″) above his eyeline. The lamps in the room were surprisingly bright, not bright enough to affect the exposure but perfect to get them bright enough to become part of the composition with the right amount of glow in the shades. I metered the lampshades at 1/60th at f5.6 for the right amount of glow and set the flash as far back as I could get it. The flash was at 30 degrees to the right of the lens axis to start with and gave a flash reading of f8 at 200 ISO so I truned the power down to 50 joules which gave a flash reading of my target f5.6. I have found that the flash pre set white balance works well with my Lumedynes, so I left the camera on that setting while using flash.

My technique is to shoot and chat, and with someone as eloquent as Sir Peter, you only have to start hime going and he can talk for as long as you want. I quickly shot the first few frames using my 28-70 f2.8L lens on a Canon EOS1D and I had some good frames immediately. I shot tight headshots with a 70-200 f2.8L as well but kept coming back to a wider composition as my main goal. With it’s 1.3x multiplier the 28-70 on an EOS1D gives a far more useable wide angle than it does on a DCS520, D30 or D60 with their 1.6x multipliers, so I stuck with that lens.The main frame (centre) was shot on the 28-70 whilst the other two were with the 70-200.

Right at the end of my time I got him to do some more solemn expressions for me and even shot a few frames at 800 ISO without flash. The first picture above was shot near the beginning of the session and the centre image was near the end when he was posing away. The right hand image was shot with available light at 1/60th at f2.8 using a custom white balance.

Shooting a portrait like this probably qualifies as the “bread and butter” of my work. I enjoy working with older subjects because they have a confidence that, when mixed with the right amount of trust, presents the photographer with a real opportunity. The restricted possibilities in this sort of situation can work to your advantage by removing choice. It’s hard to say why that’s an advantage, but it is largely because it focuses your creativity in positive ways.

Footnote: Sir Peter died a few months after these pictures were taken. A sad, sad loss.