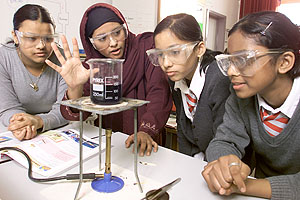 It is regularly the case that the simplest looking image actually requires a lot of thought, mental arithmetic and good old fashioned compromise. This picture has a number of compromises.

I have talked before about using light to make a scene look as if it hasn’t been lit. Achieving a look where the whole scene looks natural in a large room is difficult unless you have five or six lights unless you think laterally.

Direct flash presents all sorts of flash fall off problems. The formula goes something like this:

The amount of light reaching a subject will halve if the flash to subject distance increases by a factor of 1.4x
If there are two subjects in the image and one of them is double the distance from the light source then the further one will be two stops underexposed if the first is correctly exposed.
Sounds complicated? It isn’t. There are some things in the theory of photography, and more specifically in the theory of photographic lighting that need practical examples to make sense.

Hopefully this makes sense, the distance from the camera to the subject doesn’t make any difference. It’s the flash to subject distance that is all important, so as you can see in this example double the distance/quarter the light.

Going back to the picture that is the focus of this month’s technique you can see that there are four people in the picture, and that they are all evenly lit. That’s the simple bit – they are all in a line and it doesn’t take a rocket scientist to place the light so that they are all the same distance from it. There is, however, something else in the image – the background. It’s very easy to have a badly underexposed background way off into the distance.

In this example I have taken three different precautions to ensure that the background isn’t dark and horrible:

I moved the camera position around to the side to give a camera position where the wall on the side of the room was the background, rather than the other end of the room which was six or seven times the distance away.
I moved the lightsource as far back as possible. By taking the single flash unit and it’s umbrella back to a distance of four metres from the subjects I made sure that the side wall at only two metres would be no more than one f stop under exposed.
I allowed the available light in the room to play a part in the background exposure. The four people in the foreground would have needed an available light exposure of 1/4 of a second at f5.6, whereas the far background (right side of image) only needed 1/30th at f5.6.

The flash was putting out 200 joules and giving a flash reading of f5.6 so a shutter speed of 1/45th of a second allowed the far background to be bright enough, without dominating the scene and the aperture allowed both the foreground and the side wall to be well exposed too.

All lighting is a compromise, adding a second or third lightsource will complicate the equation but the basic principles will remain sound, always think about the light to subject distance – think about how many different subjects you have and about how much the difference is between flash to subject distances in the same picture. It sounds like a lot of thinking, but if you make it part of your routine it will pay dividends for ever more.