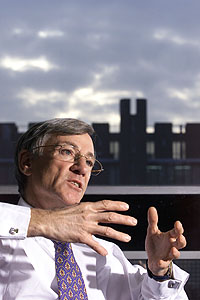 The “Interview Portrait” is one of the most difficult tasks that I am asked to undertake. Of course it’s easy enough to just turn up and shoot a picture, but actually making a proper portrait is a really difficult task. This portrait was frame 64 out of 73, frames 1- 30 were the safe shots and 31 – 73 were far more experimental.

The beauty of the interview portrait is that you know that as long as the subject and the journalist are talking you can carry on shooting. You normally have fixed amount of time so you can plan a strategy. Mine tends to be to divide the time up and shoot safe, tight, softly lit photographs for the first ten minutes or so. During this time you get to know where the eye contact is going to be, how likely the subject is to use extravagant hand gestures and how tolerant they are to flash.

If at all possible the photographer should seat everyone involved to give themself as many options to move around and get different angles, to get the right background and to be able to light the picture. The huge plate glass window behind him dictated many of the angles but the drama of the sky makes that a worthwhile compromise.

Once the safe images were “in the can” I decided that the light needed to be a lot more dramatic and that the buildings outside the window needed to be used. He was having genuine eye contact with the the reporter so I decided that the light should be coming from that angle. I placed a Lumedyne flash on a stand directly behind the reporter about twelve inches (30 cm) above her head with just the standard reflector and it’s diffuser cap over it.

This gave a flash reading of f11 on the 100 joule (watts per second) setting at 200 ISO. The f11 available light reading on a dull winter’s day in London was 1/4 second indoors and 1/90th outdoors. I wanted the sky to go darker and the buildings to be as silhouetted as possible so I used 1/180th of a second at f11. This gave a great foreground / background balance, keeping your attention on the subject whilst allowing the background to really add athmosphere to the photograph. As far as the composition goes, it was a real compromise. Having seated the subject it wasn’t really possible to suddenly move him twenty minutes into a pretty intense interview so to get the sky and buildings I was using a 28-70 f2.8L lens right at the telephoto end, lying on the floor looking up. This isn’t an angle that I would recommend shooting a portrait from but with the interview portrait there are many compromises that have to be made. Just for the record, the pictures after this one were even more risky and to be fair they didn’t come off. I had obeyed the first rule of photography, I had a good photograph that could be used before experimenting with ones that might not. Of course digital LCD screens let you know when it’s safe to play.