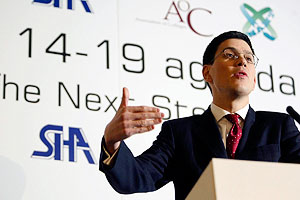 When you work for newspapers, you go to a lot of press conferences and other events where you get a man or woman in a grey suit speaking from a platform. The people who design the sets don’t consider the needs of the stills photographer, and rarely give a thought to television either. getting the light right presents us with all sorts of dilemmas.

Lighting the conference with flash becomes impossible when there are hundreds of photographers there trying to do the same, but if there less than twenty the chances are that you can do exactly what you want to do without clashing with each other.
There are many systems on the market for remotely triggering your flash and the Pocket Wizard Multi-max has to be the king with 32 channels to choose from. I have tried it, and loved it but this example was lit using the Canon ST-E2 trnsmitter and a single Canon 550ex flash unit. The principle is similar, so if you are a Nikon user (like the other two photographers that were shooting the same event) read on – it’s still relevant. The system that you choose has to have some form of coded signal unless you want your flash to be triggered by every other flash gun in the place. Ordinary slave cells won’t do. Apart from the Pocket Wizards, there are sets availble from Quantum and Wein that would do the job.

Whether the triggers are infra red or radio controlled you need to make sure that your system has the range that you need and that it doesn’t interfere with public address systems. I have never had a problem, but I have heard some scary anecdotes about high pitched feedback from radio slaves and the tripping of alarms by infra red.

For this job I arrived ahead of the main speaker, a government minister who has been tipped as a future leader of the country, to check out how much ambient light there was and to decide how best to light the scene. Sometimes the presence of a low white ceiling will tempt me to bounce the flash, but in this case I decided to set a Canon 550ex on top of an eight foot light stand, right up against the wall of the auditorium, powered by a Quantum Turbo battery and trigger the flash using an ST-E2 infra red unit. The speaker wasn’t going to be moving around too much so I set the flash to 1/4 power manual with a Sto-fen diffuser over it and pointed the flash straight at the podium which was about 8 metres (27 feet) away. On jobs like this I would often use a flash meter to judge the amount of flash required, but in this case I just shot a test frame and judged it on the camera’s LCD screen. I had guessed that the flash would need about f4 at 200 ISO, but my guess was a full stop out so I decided to shoot at 400 ISO, rather than shoot wide open.

The positioning of the flash was largely dictated by the shape of the room, but at 45 degrees from the axis of the lens and on a level with the speaker’s eyes was more than acceptable. If I hadn’t been able to use a lighting stand I would have asked the sound engineer very nicely if I could have clamped a Manfrotto (Bogen) speed clamp with the flash on it to one of the loudspeakers. I now have a clamp in the boot of my car for occasions like this.

The speech began, and I shot quite a few frames before a televison cameraman managed to disconnect the Quantum turbo from the flash gun. Whilst re-connecting the system, I turned the flash off and when I turned it back on it had reverted to E-TTL mode. In the hurry I didn’t notice until after I had started shooting again, so I shot the rest of the event on E-TTL. This turned out to be a worthwhile experiment. Whilst shooting on manual, every frame was perfectly exposed. On E-TTL using the flash exposure lock (FEL) about nine out of every ten images was perfectly exposed, whilst not using FEL only about seven out of ten were correct. That’s still a high rate considering the white background and dark suit, but shooting manually has to be the way to go in this sort of situation.

The frame above was from near the end of the speach, so it was shot using E-TTL and flash exposure lock. The other photographers shot with their flash guns on-camera, I don’t know how their pictrures turned out and they probably had different priorities from me anyway. I’m glad that I made the effort to light the scene my way, I must go out and get some Pocket Wizards!