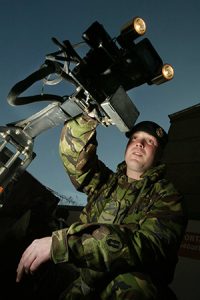 When you have to walk through one of the most impressive buildings in central London, out of the back door to where they keep the broken furniture and litter bins to shoot your picture… you feel a little hard done by!

Royal Navy, Army, Royal Air Force and Metropolitan Police explosive ordnance disposal teams gathered at the National Army Museum to show off their toys and to announce to the world that there is now a formal educational qualification on offer for bomb disposal. The outside yard set aside for them was not a photographer’s idea of a great location so I instantly started to go through the range of “tricks” that you pick up through a career for getting rid of awful or unhelpful backgrounds.

My first idea was to frame so tightly on a young disposal officer that there would be no real background at all. Secondly I tried using the ground as my backdrop by looking down at another kevlar clad soldier working on a practice mine.

My third stab at it was to use a very long lens (70-200 f2.8 with a 1.4x converter) wide open to throw the background out of focus on a shot of a Royal Naval diver in his dry suit and underwater breathing apparatus. Each of these images worked, but I wanted drama so I settled on shooting an Engineer with his remote controlled robot from below using a winter sky as my backdrop.

We were in an alley, but the wind was still a factor so I had limited options for using light modifiers. I decided to use a Lumedyne head with a simple diffuser over the reflector – directed onto the soldier. I took a reading from the sky and calculated that I would need to shoot at 1/250th at f22 on 200 ISO to get the kind of dark sky that I wanted. The flash was set to at about thirty degrees from the axis of the lens and on the eyeline of the subject. I guessed that a power output of 100 joules (watt seconds) would be about right and used a Pocket Wizard to trigger it , composing the photograph before shooting a test frame. The soldiers face was still a little overexposed, but the sky was fine so I turned the flash power down to 50 joules and tried again.

This time the exposure was good, but the LCD screen told me that something was missing so I asked the soldier to turn on the halogen headlamps on the robot. This gave me two bright yellow spots against the sky.

I only had one Lumedyne with me so I attached a spare Pocket Wizard receiver to a Canon 550ex flash unit to add some light to the machine itself and placed the flash on the floor with a Sto-fen omni-bounce looking straight up at the robot arm. This light caught the camouflaged sleeve of the soldier and filled in under his chin as well. 1/4 power on the speedlight was perfect and I shot a few more frames, the last of which you see here. The image as a whole is part intention, part accident and part making use of what’s there.

The whole process took quite a while and it helped to have a patient subject while I fiddled around with power settings and lighting angles. I was pleased with the whole set, but especially so with this image.