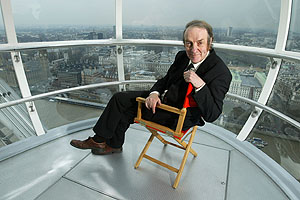 The previous technique example mentioned the fact that I get to shoot portraits in the most amazing places and just to emphasise that point here is another on.

The subject of this photograph has been recently appointed by The Mayor of London’s office to oversee education in the capital city and so we decided to shoot his picture in one of London’s most recognisable places.

The British Airways London Eye is that huge Ferris wheel on the south bank of the River Thames featuring a whole series of glass “pods” which rotate at a speed of just over two revolutions per hour. I had taken pictures in these pods a few times before and they present a real lighting challenge, no matter what the weather is like. In bright sunshine you get glare and odd shadows from the ambient light that you need to fill with flash. On overcast days or at night you get glare and odd shadows from within the pod.

The journalist and I had a private pod donated to us by British Airways and we had around half an our to board the eye, get the bare bones of the interview and shoot the portrait.

This job called for some preplanning and in discussions with two members of the picture desk team it was decided that we would inject some colour into the scene and get around the subjects height by sitting him in a chair that we bought for the occasion. A simple red director’s chair was the answer and we had plans for what else we could do with it should the feature need some additional pictures. We had also consulted a map and worked out where the sunshine (if there were any) would be coming from and arranged the session for early afternoon to make use of that knowledge.

The eye, or more specifically each pod, is a big glass box with reflective white painted framework and a shiny metallic floor. The weather on the day was rather dull and so I absolutely had to light the portrait. The space inside the pod is rather limited so there was really only one place that I could set up my Lumedyne flash to get a decent light and avoid the perils of hundreds of reflections on the glass and paintwork. The light, with a Lastolite Umbrella box attached was placed at an angle of about sixty degrees from the axis of the lens on the same side of the pod that I would be shooting from. The centre of the lightsource was level with the subject’s eyes. The exact angle would change with any other location of a similar type and I quickly realised that there would be reflections no matter where I positioned the flash. The image shown here has two reflections of the brolly box in it, but both are safely away from the main interest of the frame. I attached the stand to the railing with an elasticated cord (bungee rope) so that I didn’t have to extend the legs which would have intruded on the composition as I was shooting at the wide end of a 16-35 f2.8 lens.

The deal with the journalist was that she could interview our man (safely seated in his red chair) for the first ten minutes and the last ten minutes and I would get him for the middle third of the “flight”. This gave me ten minutes to set up, take exposure readings and shoot a few test shots. As the wheel reached it’s summit the light would be a fraction brighter inside the pod but outside would remain fairly unchanged.

The ambient reading of the buildings below us, through the lightly tinted glass was 1/125th at f5.6 on 200 ISO and so I set about balancing the flash to give the same reading inside the pod. With everything in place I shot a few test frames and realised that I needed to bracket the exposure for the ground by about one f-stop each way just to make sure that we ended up with a pleasing balance. The outside was overcast and quite blue, and so I decided to go with a slightly high Kelvin white balance inside at 6200éK and allow my subject to be a little warm whilst bringing the city back to a more normal colour.

My time came around and I shot various pictures as the wheel went between “10 o’clock” and “2 o’clock” and the best compositions were made towards the end of that time. I moved the chair several times and ended up with it as you see above – with my subject leaning across the back of it. The best exposures were with the background at minus half a stop of the “correct” reading at 1/180th of a second at f5.6 My ten minutes were over and I had the rest of the journey to pack my kit away and getting ready to disembark from the pod.