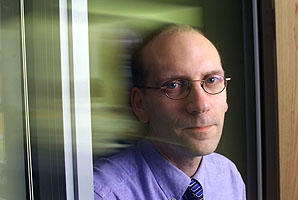 The most run of the mill jobs are twenty minute location portraits of people who aren’t famous and who really have no idea what being photographed by a professional might entail. This image was shot on a wet day in a dull office in twenty minutes, so how was it done….

The subject must have little or no ambient light on them. The background ambient light must not be even, there must be light and shade, the greater the contrast the more dramatic the image. If you have, or can engineer these factors then you can follow these steps.

1. The subject is lit by flash and the camera is set to daylight balance. The Nash image is 200 asa, and I’ll give the settings for that shot as I go. So – you flashmeter the subject with the light source at about 45 degrees to the camera. In this case the flash reading was f5.6 (pack set to 50 joules). The ambient reading on the subject was two seconds at f5.6. To make sure that no significant amount of ambient light was on the subject’s face the shutter speed had to be at least an eighth of a second (or faster). If you notice, he was in the doorway between rooms. The room he was facing into (and that I was in) had the blinds drawn and the lights switched off.

2. Next, it was important that there were brighter lit areas behind him and the fluorescent strip lights in a nearby office were giving a reading of 1/10th of a second at f5.6. That exposure meant that he would be lit by flash alone and that the room beyond was lit by (strip) ambient light alone. The camera was set to 1/10th at f5.6.

3. Finally the camera needs to be using first curtain flash synch. That’s only important if you are using a Canon (or Nikon) flash.

4. You compose the picture and during the relatively long exposure you deliberately move the camera. This one was left to right. You need to move the camera towards the flash in most cases. The ambient light then blurs and the subject is frozen where the flash catches him. It’s good if the flash is off camera because the effect is strengthened by the subject having some shadow on him, over which the ambient can blur. This is done entirely “in camera” and requires no photoshop alteration. With a digital you can check what you’ve done on the screen and alter the light balance/direction of movement/angle of movement accordingly. I originally learned to do this using transparency film and a lot of it! I also tend to explain to the confused looking person that it’s a technique to move the camera, otherwise you may have them thinking you’re a bit mad!!

5. I find that points of light such as bulbs or distant street lights work pretty well, coloured light works well too. I have used christmas trees many times to great effect. As long as the subject is lit only by flash you can let your imagination go.

It’s all trial and error in the end. My entire technique involves balancing flash and ambient light in some form or other, although in most images you cannot see the joins!