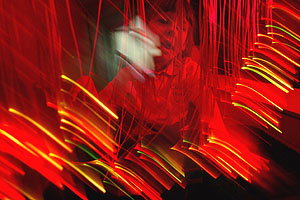 Sometimes you see a picture, you want to take that picture and you can’t. A dimly lit room with all sorts of stimulating lights, smells and sounds used to help children with physical disabilities learn to use their powered wheelchairs as well as enjoy themselves presented such a dilemma.

The lights in the room were coloured with lighting gels and changed as the child operated different buttons. There was also a curtain made from fibre optic cables with coloured lights being fed down them but the available light reading for the scene was 2 seconds at f2.8 on 400 ISO.
The whole scene was a perfect illustration for the story about the school so I decided that the only way to make the shot was to copy the light using a flash unit, some available light and some coloured gels of my own.

The choice of colours from lights in the room was red, green, orange and blue and of those colours I had all of the colours with me. Our newspaper reproduces red better than most colours so I decided to go with that option.

I placed a red gel over a Canon 550ex flash unit, set it to 1/4 power manual with a Sto-Fen Omni bounce fitted and placed it off to the side of the girl resting on a work surface. This made the light source eighty degrees from the axis of the lens to my right and about thirty degrees below the subject’s eye level. The walls and ceiling of the room were white, so I guessed that the light would bounce around giving a relatively even light.

I decided to use a Canon ST-E2 infra red unit to trigger the flash and fired a frame with an aperture of f5.6 and a shutter speed of 1/15th of a second. The flash exposure was a little under, so I opened up to f4 and fired another test. I had set the camera to 200 ISO so that I could use a long ambient exposure to give movement in the fibre optics. As the girl played with the fibre optic curtain I shot several frames ranging from 1/2 of a second to 1/10th of a second and moved the camera sharply whilst the shutter was open. I have discussed before on this site the use of an LCD screen to judge the amount and direction of the movement and I quickly realised that in this case a diagonal movement from top right to bottom left was best.

The frame above had an exposure of 1/4 of a second at f4 and that gave a great effect on the moving fibre optic curtain. I tried the shot with green and orange gels but the girl in this frame had moved on and the boy behind her in the queue wasn’t able to move the curtain so well.