Pepping Up The Background 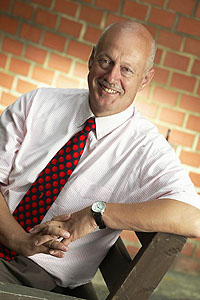 Some photographs have to be simple. There are often very few options for lighting the main subject, but there is nothing to stop you adding some interest by lighting another part of the frame.

As part of my daily job I often photograph people who we will need to run photographs of on a regular basis. I normally have to make sure that I have enough different images from that session to give the picture desk a chance to re-use the session several times. The location cannot always be relied upon to provide a wide range of opportunities so it’s important to vary the composition and lighting as much as possible. In an ideal world your subject will bring changes of clothing to help ring the changes, but that isn’t always the case.

This trades union official works in an inner city office building which has seen better days. The outdoor area is an interesting courtyard with some seating and is constantly in the shade. There was no choice other than to light the scene and I decided to use a single Lumedyne head connected to a 200 w/s pack and a 90cm opaque white umbrella.

I set the light at an angle of about 60 degrees from the axis of the lens to the right and about fifteen degrees above the subject’s eyeline. The distance from the subject to the flash was about two metres (80 inches) and the flash reading on 200 ISO was f9. I decided that the power was a bit high, so I turned it down to 100 joules which gave a reading of f6.7. There wasn’t any ambient light involved in the image with a shutter speed of 1/125th of a second and the background was too dark.

I quickly decided to put some light into the brick wall, so I set a Canon Speedlight 550ex to 1/4 manual power and triggered it with a second Pocket Wizard Plus receiver. The first test shot showed the hot spot that I was looking for, but too far to my right. I angled the speedlight a bit further down and to the left.

This gave the kind of shaped hot spot that I had imagined and I shot several frames before turning up the power on the 550ex to 1/2 power to give a really “over the top” hot spot on the brick wall. I preferred the hotter background when it came to the on screen edit and this was one of those occasions when it was never clear from the LCD screen which exposure would be more pleasing on a proper monitor.

The other interesting thing about this photograph is the direction from whicch I decided to light the subject. I normally have a “rule” by which the light comes from the same approximate direction as the subject’s chest is facing. I’m not even sure why I “broke” my rule, but the effect is a good one and it adds to the composition.

For the record, I shot four different set-ups. I included at least two from each in the final edit as well as a couple of tight “head and shoulders” shots which could be used for single column identifier pictures and it was one of these that was used in the paper on this occasion!