Shooting From The Shade 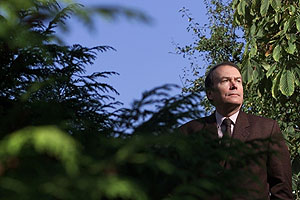 My love of lighting photographs outdoors has made me into an observer of the work of other photographers. If I see a shot that I like I spend time working out how it was done, and if that shot was lit I am even more interested

Many glossy magazines use images lit outdoors and my knowledge of photography has convinced me that those photographers carry around “portable shade”. The subjects are always immaculately lit, and perfectly balanced with the background.
I have developed my own version of this technique which I call “not portable shade” or “NPS” for short. The only difference between my technique and that employed by expensive photographers and their army of assistants is that I find some shade that is already there and build my photograph around it.

When I arrived at this location in Oxford my eye was immediately drawn to the shade cast by the large number of evergreen trees and the quality of the autumnal blue sky. By the time I met the professor that I was photographing I had made my mind up how I wanted to shoot him (breaking one of my self imposed rules!).

It was important that I found an area where the subject could be in deep shadow, with some northerly (deepest blue) sky and light on the background foliage. Once I had found my location I metered the sky at 1/250th at f8 on 200 asa. This gave the sky it’s true colour and also exposed the background green folige correctly. I slotted the professor into the gap between the two rows of foliage where the available light reading was 1/30th at f8, so no significant ambient light was on him. I set my Lumedyne up at and angle of about 80° from the lens axis with the stand extended to about 2 metres in height and the reflector covered by it’s diffuser cap. The flash was to be triggered by my Wein infra red trigger kit, so the Ultra Slave sensor was attached to the head. The flash was about 3 metres from the subject and set to 100 joules.

I started shooting some fairly straight images with the subject looking into the camera at the height of his eyeline with a 28-70 lens (44-112 35mm EQ) with the camera set to 1/250th at f8. As I was shooting pictures I started to move further away from him and he became a lot more relaxed.

People seem to fall into two categories when you are taking their photograph. There are those who can look into the camera and look fine, and there are those who are far happier looking anywhere other than into camera. As a general rule, those looking away from the camera have to be looking at the main lightsource if they are not to look “shifty”. This man was most definitely an “away from camera person” which allowed me the luxury of being able to shoot from below his eye level without giving him a second chin.

Eventually I was lying on the ground with a 70-200 f2.8L lens on the camera with a lot of out of focus foliage between us. This framed the image nicely, and the finishing touch was to replace the flash trigger with a 550ex speedlite with a Sto-fen Omni-bounce fitted set on 1/64th power just to give the foreground a little bit of light. The Ultra slave is just as happy being triggered by a speedlite as it is the SSR trigger, and the photographer was happy with his results.