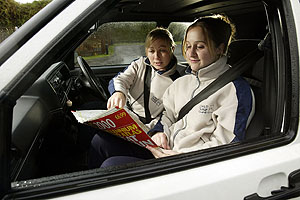 By now I have become a dab hand at shooting with the 550ex so I tried lighting this picture through a (stationary) car windscreen. The story was about car sharing and it was raining extremely hard, so I decided that it was OK for me and my kit to get wet, but not the two young women in the picture.

I had a Turbo powered 550ex on a Manfrotto stand on the bonnet (hood) of the car. The outside exposure was 1/45th of a second at f4.5 at 200 ISO so I needed to balance the interior to the same. I wasn’t too hopeful of the E-TTL coping with this one, but I tried…and it worked!!! A spot-on exposure first time using the FEL (flash exposure lock).

The problem was that the girl in the foreground’s hair blended with the dark roof and interior fabric of the car. I set a second 550ex on a stand with a gold coloured Omni-bounce outside the car, directly behind her head to give her some “rim light”. Again, it worked exactly as I wanted it to on E-TTL – no need for manual exposure control, which was an even bigger surprise. I’m not sure why it worked so well in this instance, but it did and the lesson has to be “try it, it might just surprise you!”

I will continue to use my Lumedyne kit for the greater percentage of my work, but I was really surprised by just how good the Canon flash units and the ST-E2 are when used properly.