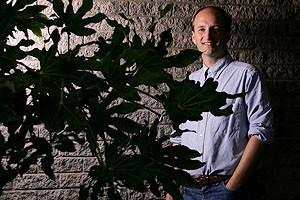 Sometimes you have too persuade people to have their photograph taken in places that they would never have chosen for themselves. This can sometimes be because you, as the photographer, are being awkward or it can be because you are trying to say something about the subject in tricky surroundings.

The subject of these portraits is a conservation scientist and university lecturer who does his field work thousands of miles away from the concrete buildings in which he has his teaching rooms. The pictures needed an element of the natural, but his environment was pretty much devoid of nature. I get bore of laboratory shots and the paper avoids them (and computer shots) whenever possible.

My subject me in reception and we started to walk to his office when we passed under a concrete walkway with foliage growing nearby. I suggested that we try to shoot the portrait here and he eventually agreed. It did mean that his colleagues would be continually passing by and passing comment, but that’s all part of the compromise that makes being a newspaper photographer interesting. My first thought was to make use of the brilliant green colour of the foliage to somehow frame him, but this didn’t work for me with the concrete block work of the walkway. It was a sunny day and I wanted to avoid having my subject in direct sunlight and so I had decided to stay in the shade of the walkway.

A few days before this job I had received a 19″ Norman octagonal softbox and I really wanted to use it on a job. This was the prefect opportunity to try it out because it would give a great hard light from one side which complimented the surroundings. I placed the Lumedyne flash unit on it’s stand and with the Norman softbox at an angle of almost 90 degrees from the axis of the lens and about 3 metres (10 feet) to the subject’s right hand side. This meant that the flash was against the block work wall. This has two useful effects – apart from lighting the subject – the first is to light the wall in a very graduated and pleasing manner, and the second in this case was to put the huge leaves into almost silhouette.

I didn’t want any daylight to intrude on this portrait and so I set the camera’s shutter speed to it’s maximum flash synch’ of 1/250th of a second. The canon EOS1D MkII has the ability to work at 100 ISO so that’s where I set the camera. The Lumedyne and Norman softbox combination is capable of putting out a lot of light and so I set it to 1/4 power hoping that I’d get enough depth of field to have the leaves in sharp outline rather than being out of focus and therefore soft edged. With this all in place I started out with a 24-70 f2.8 lens and an aperture of f8. Two test shots revealed that I needed a bit more light and I had the choice of opening up the lens by one stop, increasing the ISO to 200 or putting the power up on the Lumedyne flash. I wanted to keep the depth of field, and I like working at 100ISO and so I increased the power on the Lumedyne to 1/2 power (100 joules or 100 watt/seconds). This was exactly the right exposure.

This had all happened in under five minutes, so i felt that I had time to experiment. My first change was to shoot with a longer lens to compress the perspective and then I tried doing the opposite by using a 16-35 f2.8. This had an interesting effect, but left me with a lot of dark and uninteresting space in the composition so I placed a Pocket Wizard receiver on a Canon 550ex flash and put some green gel over the flash tube. I placed the flash out of view but pointing against the wall behind my subject and shot a range of frames with the second flash in various positions and with various manual power output settings.

This picture comes from a simple concept and from varying that concept in subtle but interesting ways. It’s the result of some photographer opportunism and from a desire to take pictures that help tell the story in unexpected ways. Of course I’d have preferred to take his picture in the Amazon basin, but the budget didn’t stretch that far!