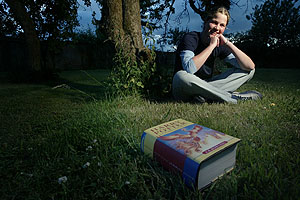 Creating a pool of light is one of the most effective ways of emphasising part of an image. There are many ways to achieve this, but for the traveling photographer who has to carry their own kit a small piece of aluminium foil has to be one of the simplest.

This portrait of a young book reviewer needed to have atmosphere. She had read “The Order of The Phoenix” in less than two days to complete her review of the books and it made sense to use light in the gathering dusk to give the image something extra.

Under the trees the light reading was only 1/30th of a second at f8, but that gave a bleached out sky. The sky on 1/250th at f8 was a better tone, but rather grey. I decided to add some colour by putting some 85B gel over my Lumedyne flash head and exposing the pictures on a tungsten white balance. This gave the sky and all other areas not covered by the flash a pleasing blue hue. The shifted colour on it’s own was not enough to give the drama that I wanted, so I took the piece of folded aluminium foil that I always carry from my bag and formed it into a tube.

The piece of foil is about 35cm (14 inches) by 30cm (12 inches) and forms an excellent snoot around the reflector of a Lumedyne standard reflector. I shot several frames with the young lady holding the book, both looking into camera and then pretending to read the book and I was very happy with the pictures.

Just as I started to congratulate myself for doing a good job, she put the book down in front of her and rested her head on her fists. I quickly realised that this was a much better pose and started to shoot a few frames like this. At this point the LCD screen showed me that the book was outside the pool of light so I was presented with two options. I could either set up a second light on the book, which would take a lot of time to get perfectly balanced at the risk of losing the dusk light in the sky, or I could bend the aluminium foil snoot out a little to give the pool of light a sort of “comma” shape – a back to front 9 sort of effect.

I decided on the latter because of the time constraint presented by the failing light and I quickly made the necessary adjustments in the foil. The effect was actually quite spectacular on the LCD screen so I finished the shots pretty quickly, concluding the set with an exposure of 1/125th of a second at f5.6 on 200 ISO with the 85B gel still over the flash and the light a little over ten degrees above the subjects’ eyeline and at an angle of about sixty degrees from the lens axis. The flash is barely three feet (90cm) from the subject, set at 50 joules (w/s).

Just to be on the safe side, I shot some less dramatic frames back on a daylight white balance and without the improvised snoot, but I prefer this shot because it has the sort of atmosphere that the picture editor wanted. In the days of black and white, I could have spent an hour burning in the background but doing it with light and in camera saves a lot of guess work and avoids a lot of headaches.